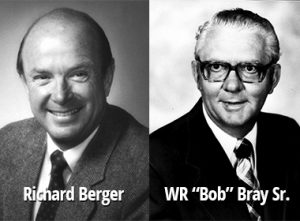 It is with great sadness to share with you that we have lost two of our past CAR leaders in December – WR “Bob” Bray Sr. (1965 CAR President) and Richard Berger (1990 CAR President).

W.R. Bray passed away on Friday, December 1, 2017. He was 90. He was the Chairman of the Board of Bray Realty until about four months ago, “where he was still going into the office twice a week to read up and meet with agents,” said his son Robert. Bray showed early acumen for business as a student at Grand Junction High School and later at Mesa Junior College where he earned an associate’s degree. In 1952, W.R. Bray left the J.C. Penney Co. and joined the company founded by his parents a decade earlier. Today, Bray Realty employs 110 people. Over the years, he served as Chairman of the Grand Junction Area Chamber of Commerce, and President of the Grand Junction and the Colorado Association of REALTORS®, organizations that also recognized him as REALTOR® of the Year. “He was one of the finest men in Grand Junction,” said Levi Lucero, one of the real estate agents who worked with Bray. “His brain always worked in a positive mode.”

Richard W. (Dick) Berger, CRB, CRS, GRI, had been involved in Colorado real estate since 1961. He was active in real estate brokerages in the Denver, Montrose and Durango areas.