A February report from Zillow paints a different picture than the one from CAR.   ### DENVER — In a market trends report released in early February from the Colorado Association of REALTORS®, the numbers show Denver median home prices going down by 1.2 percent in January of 2019 compared to January of 2018.   "We're seeing prices go up 3 to 4 percent in some...

Isn’t Everyone Who Sells Real Estate a REALTOR?

All real estate licensees are not the same.  In Colorado every real estate broker is licensed by the State, but only those licensees who are members of the National Association of REALTORS® are properly called REALTORS®. By joining the REALTOR® Association, members have agreed to subscribe to a strict Code of Ethics and are expected to maintain a higher level of knowledge...

Third Quarter 2013 Housing Statistics from the Colorado Association of REALTORS®

ENGLEWOOD, Colo. – Oct. 23, 2013 –  The most common measures of housing market performance – sales, new listings, median price and days on the market – all showed significant improvement statewide and in most regions of Colorado during the third quarter in 2013 compared to the same quarter in 2012.  In addition, Q3 2013 marked at least the fourth consecutive quarter of housing market improvement on these same measures in most regions of Colorado.

Although inventory statewide continued at low levels, new listings increased about 15 percent to 35,305 (comparable quarter to quarter).  Both the single-family (+14 percent) and the townhouse-condo (+21 percent) markets experienced increases in the number of new listings on a statewide basis. Median sales prices statewide continued to rise at pace similar to the previous quarter (Q2 2013); up 9 percent to $260,000 for single-family homes and 10 percent to $171,000 for townhouses and condominiums, again, compared to the same quarter in 2013.

Days on the market continued a downward trend (-25 percent for single-family and -30 percent for townhouses-condos) and the statewide number of total active listings at the end of the third quarter stood at 35,388, up more than 6 percent over the previous quarter (Q2 2013).  This represents a 4.5-month inventory for single-family homes and a 3.8-month inventory for townhouses-condos.

Lender-mediated properties (foreclosures, short sales, REO or other distressed property sales) represented 9 percent of all sales during the quarter, continuing a downward trend of more than six quarters.

“The main story in these new numbers is that in most places around our state the real estate markets have been steadily improving, creating what many analysts would call ‘normal market’ conditions,” said CAR spokesperson, Anthony Rael. “Overall the news is very good for both buyers and sellers.  Better inventory will provide buyers with more choices and improving prices should attract more sellers into the marketplace.  One area of concern is the long-term impact that recent flooding and wildfires earlier this year may have on certain markets going forward.”

The CAR Housing Affordability Index is a newer statistical measure for Colorado’s housing market that uses median sales price, prevailing interest rates and average income to measure local housing affordability. An index of 120, for example, means that the median household income was 120 percent of what is necessary to qualify for the median-priced home under prevailing interest rates. A higher number is usually interpreted as greater housing affordability.  Higher values generally benefit buyers whereas lower values help sellers.

The combined statewide affordability index during the third quarter of 2013 was at 142 with the townhouse-condo market enjoying more affordability (192) than for single-family homes (135).  As housing prices rise, affordability tends to go down unless median income rises to keep pace with the increased cost of real estate.  All areas of Colorado are seeing decreasing affordability.

The Colorado Association of REALTORS® Quarterly Market Statistical Reports are prepared by 10K Research and Marketing, a Minneapolis-based real estate technology company, and are based on data provided by Multiple Listing Services (MLS) in Colorado.  The current Q3 2013 reports represent approximately 86 percent of all MLS-listed residential real estate transactions in the state.  The metrics do not include “For Sale by Owner” transactions or all new construction.

In addition to cumulative statewide statistics, CAR has commissioned six regional reports, using the same measures, whose content is summarized below along with local expert contacts. 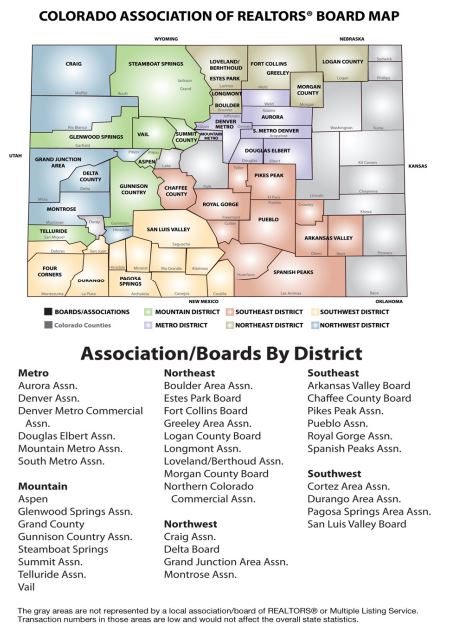 The third quarter of this year produced sales figures for this region that are a significant improvement over the same period in 2012 and over the second quarter of this year.  Sales of single-family homes rose 20 percent compared to the same period last year, nearly seven times the growth rate for Q2 2013 (3 percent).  Townhouse-condo sales showed comparable gains (+27 percent, quarter to quarter).  The median sales price jumped 10 percent for both single-family (to $285,000) and townhouses-condos (to $165,000.) As noted above, one of the consequences of improved prices is that affordability decreases, in this region by 15 percent, though metro-area condominiums and townhomes have one of the highest affordability indices in the state (198). This area of the state continues to enjoy properties having the fewest days on the market, down to 39 for single-family and 37 for townhouses-condominiums.  The quarter closed with 13,233 active listings representing slightly less than a three-month supply.

This region of Colorado enjoys the second lowest number of days on the market (75) and the smallest percentage of lender-mediated sales (6 percent).  Most measures have seen five or more consecutive quarters of improvement.  Sales were up 18 and 21 percent respectively for single-family homes and townhouses-condos. Median pricing rose nearly 10 percent in both categories.  There were 5,722 new listings during the quarter, representing a 12 percent increase over the same time last year.

The region ended the quarter with 5,500 homes available, representing a 3-4 month supply.  Affordability declined about 14 percent, with townhouses-condos about one-third more affordable than single-family homes.

This region has now enjoyed seven consecutive quarters of increased new listings, up 20 percent (1,795) compared to the third quarter 2012.  Single-family sales rose by 5 percent and the median price on those homes increased 3 percent to $181,100.  The townhouse-condo market fared better on sales, up 7 percent with median prices on those 80 properties rising 5 percent to $135,000 compared to the same quarter last year.  Affordability remains very high in this region (232 for townhouses-condos and 183 for single-family homes).  Lender-mediated properties represent 23 percent of sales, the highest in the state.  At the end of the quarter there were 2,700 properties available representing about an eight-month supply.

Townhouse-condo sales in the Southwest Region experienced the largest increase in the state (+39 percent) though the median price on those 122 properties declined 12 percent to 174,950 compared to the third quarter of 2012.  Single-family home sales in this area rose 19 percent with median pricing increasing 10 percent to $240,000.  Lender-mediated properties represented 12 percent of all sales, second highest in the state.  Days on the market dropped 13 percent for both categories, reversing a slight trend of increased days for townhouses-condos.  Affordability is slightly above the state average with townhouse-condos more affordable and improving in affordability, the only area in the state where that is the case.   There were more than 2,600 properties available at the end of the third quarter (16 months for single-family listings and 11 months for townhouse-condo listings).

Spokespersons throughout Colorado are available for interviews or to answer specific regional questions.  The reports cited in this press release are available online at www.ColoradoREALTORS.com/HousingStatistics.