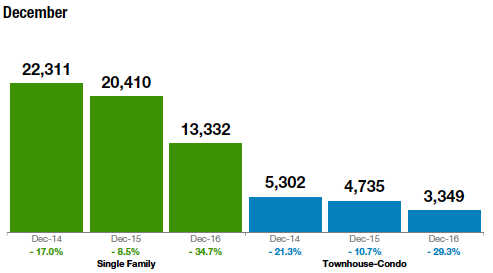 While the median price of a Colorado home remained flat in December 2016 at $315,000, buyers and sellers experienced a 10 percent increase in the median sales price over the course of the year, according to the latest statewide housing report from the Colorado Association of REALTORS® (CAR). With a median sales price of $287,000 in December 2015, the past year featured a shrinking housing inventory punctuated by the lowest number of new listings in December 2016, and continued strong demand from a growing Colorado population. All of these elements shaped a consistent theme for the 2016 Colorado housing market. 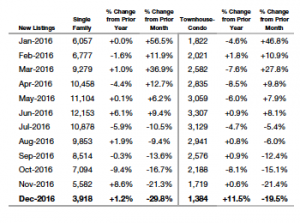 Overall, there were less than 16,700 homes on the market in December across the state, the lowest total in more than a year. The combination of factors has driven inventory for both single-family homes and townhome/condominiums to a 2016 low at 1.9 months and 1.5 months, respectively (see charts below). While the Metro Denver Region has just over a 1-month inventory of single-family homes available, the area’s condominium/townhouse inventory is below a 1-month supply. There is a slightly higher supply of inventory in the state’s mountain (six-and-a-half-month inventory) and southwest region (nearly 7-month inventory). A market is considered balanced with a 4-7 month supply of inventory. 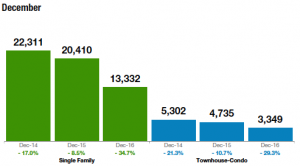 The overall thin inventory across the state also took its toll on the number of sold listings in December 2016, down 6.7 percent from November to 6,331 single-family homes and -7.1 percent to 1,984 condominiums/townhouses. 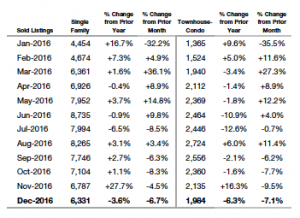 With the exception of the mountain market, where median sales prices jumped 8.6 percent to $505,000, sales for both single-family homes and townhouse/condominiums remained relatively flat across the remainder of the state in December. However, when reviewing 2016 as a whole, all but the southwest region (down 6.5 percent in 2016) experienced increases for the year.

Despite the continued short supply of available homes for sale, the average number of days that homes stay on the market (DOM) edged up for both single family and condominium/townhomes before sale.  The DOM for Colorado single-family homes in December was 59, its highest average since the first quarter of 2016. For condominiums/townhouses it was an average of 50 days on the market before sale, also in line with its Q1 2016 DOM.

Finally, affordability, a measurement based on the relationship between housing prices, prevailing interest rates and local income levels, also took a hit in the month of December. For the year, affordability for single-family homes was down 12 percent while the townhouse/condominium affordability index dipped more than 16 percent.

The Colorado Association of REALTORS® Monthly Market Statistical Reports are prepared by Showing Time, a leading showing software and market stats service provider to the residential real estate industry, and are based upon data provided by Multiple Listing Services (MLS) in Colorado.  The December 2016 reports represent all MLS-listed residential real estate transactions in the state.  The metrics do not include “For Sale by Owner” transactions or all new construction.

The complete reports cited in this press release, as well as regional reports specific to the Denver Metro, Mountain, Northeast, Northwest, Southeast and Southwest markets are available online at: www.ColoradoREALTORS.com/HousingStatistics