More Than a Seasonal Slowdown?

More Than a Seasonal Slowdown?

ENGLEWOOD, Colo. – Sept. 13, 2017 – While the number of potential buyers in Colorado’s housing market remains strong, traditional seasonal cooling, coupled with low inventory and steady median housing prices across the state, are defining the fall market according to the monthly statewide housing report from the Colorado Association of REALTORS® (CAR).

Following are insights about local market conditions from several of the Colorado Association of REALTORS®  research spokespersons practicing across the metro area and state:

“The market in Boulder and Broomfield counties continues to be strong, but the typical seasonal summer slowdown was more significant than in the past. While the number of listings is up, they are selling just as quickly as in years past.  The high-end market has seen the brunt of the summer slowdown, with many price reductions heading into the fall. The condo and townhome market remains stronger than single family, indicating the affordability of these properties continues to be appealing. The fall is starting briskly but the majority of our appreciation has already occurred this year,” said Boulder-area REALTOR® Kelly Moye.

“Like Charles Dickens’ fabled tale, Denver’s housing market remains conflicted in its lopsided demand and production between condos and single-family homes. A Tale of Two Cities’ between August 2016 and August 2017, the number of sold listings for single-family homes has dropped a sharp 14.3 percent while the condominium market has increased that number by 11.7 percent. This is a 26 percent difference, which is attributed to both the lower inventory supplying the single-family craving and what appears to be an even larger growing appetite for the beast that is Denver’s condominium demand.

Denver is, however, beginning to show some ‘too-soon-to-tell’ cooling, which explains the 11.1 percent increase in days on market until sale between August 2016 and this past month in the single-family arena, 8 percent for condos. The best explanation is not a revolution like in Dickens’ tale but that buyers and sellers alike are beginning to assume a spectator position despite the high demand for both,” said Denver-area REALTOR® Matthew Leprino.

“In the Colorado Springs area, the housing market remained strong the month of August. There was more than 14 percent increase in sales of single-family patio homes over August 2016 with over 14 percent decrease in active listings. The year-to-date sales are up 7 percent over last year. While the strongest demand remained for single family/patio homes priced under $300,000 with a 4 percent increase over July 2017, there was a 13 percent drop in sales of homes priced between $400,000 and $800,000. The upside is that it is an opportune time for buyers to buy homes priced over $400,000. The condo and townhomes active listings were down by 40 percent in August of this year compared to August 2016,” said Colorado Springs REALTOR® Jay Gupta.

“The Vail market maintained the overall trend for the year with a strong upper end market and more volatility in the mid and opening-price niches.  August was a bit slower than prior months, following our traditional seasonal trends.  However, townhome/condos saw a 12 percent increase in sales while single family saw a 12 percent decrease for the month.  Inventory and absorption rates are solid with 5.6 months for townhome/condo and 9 months for single-family/homes.  The performance for the month and year-to-date have dramatic variables in the different price niches requiring knowledgeable representation to find a value.” said Vail Valley REALTOR® Mike Budd.

“The market in Jefferson County is changing. For the last 3 years, the market has been hot, especially in Golden, with no seasonal slow down in the last quarter of the year. However, this year there appears to be a more than seasonal slowdown. Homes under $300,000 are still going fast with some multiple offers depending on their condition. Though we’ve seen an influx of listings this last week, before that listings were few – down significantly from one year ago. Medium sales price is staying level and prices are coming down on higher-end homes. For town homes/condos the medium sales price is still increasing. We need more townhomes that are more affordable and with FHA financing. Days on market for town homes/condos are still at 13 days on an average,” said Golden-area REALTOR® Barb Ecker.

“In the Brighton Market and along that portion of the I-76 Corridor, the tables have slightly turned, showing signs of market cooling in the hot month of August. A decreased number of homes are being listed, and fewer homes selling are causing a slower market for home sales. The inventory of active listings in the Brighton area is down 20.9 percent compared to one year ago. Even with that market slowdown, the low inventory of homes is what continues to keep the prices steady with a slight increase,” said Brighton-area REALTOR® Jody Malone.

“The Colorado ski resort areas continue to do well in 2017. August sales were up 20 percent in dollars but down 15 percent in the number of sales in the Telluride market, indicating that the higher-end properties are finally starting to sell. Our out of town mesa properties, 15 to 45 minutes from Telluride, have finally started to sell, somewhat briskly. Telluride’s year-to-date sales are up 39 percent in dollars and 16 percent in the number of sales. Total inventory available is down about 10 percent as compared to last year at this time. Resort markets generally take longer to create new inventory, hence we predict a continued rise in prices for the next couple of years. Buyer’s interest is strong, but drops off a little in August due to families traveling back to their primary home locations so kids can start school,” said Telluride REALTOR® George Harvey.

“The Pueblo West market is still solid with good listings going under contract within a couple of weeks. Listings are up 14.8 percent for single-family homes but selling quickly. Sold properties are up 13.5 percent and the average price is up 4.9 percent. Our inventory supply is still dropping, though, and remains under 3 months.  Homes in the $300,000 – $400,000 range take a little longer to sell. Overall, our local agents remain very positive about the market and we’re seeing an increase in new construction permits,” said Pueblo-West REALTOR® David Anderson. 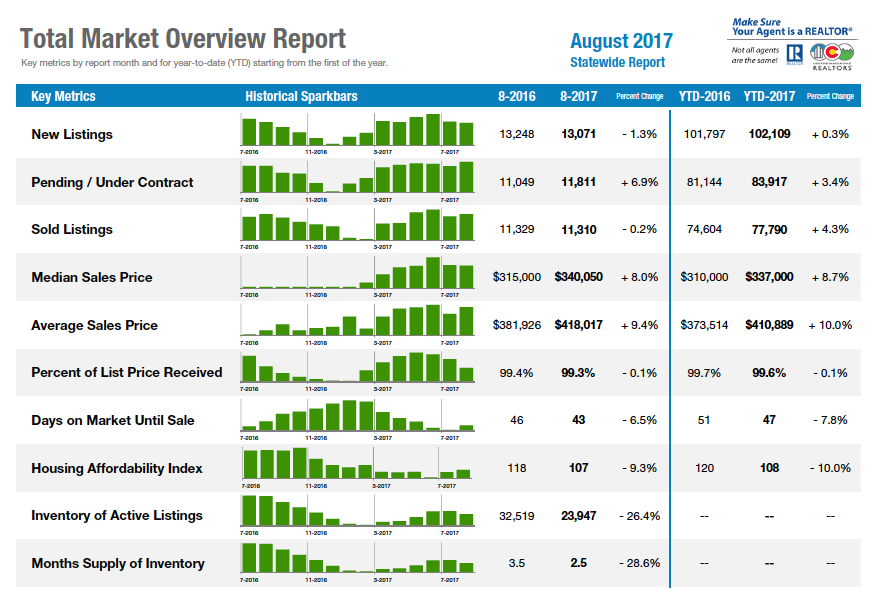 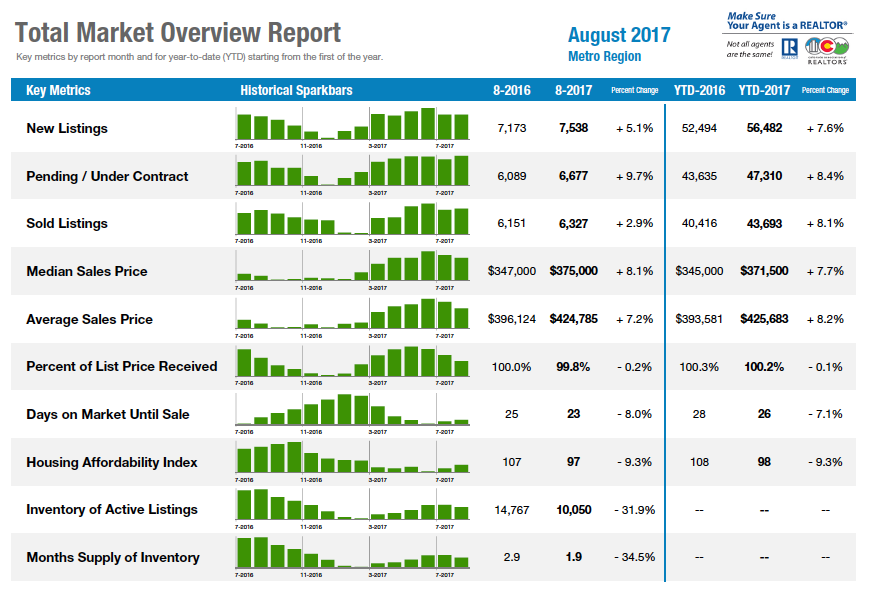 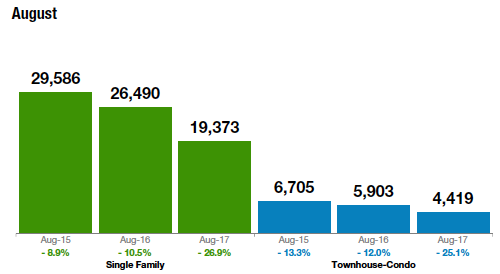 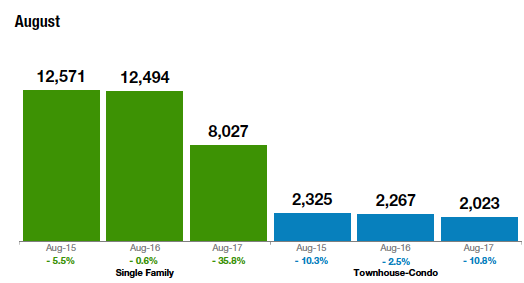 The Colorado Association of REALTORS® Monthly Market Statistical Reports are prepared by Showing Time, a leading showing software and market stats service provider to the residential real estate industry, and are based upon data provided by Multiple Listing Services (MLS) in Colorado.  The August 2017 reports represent all MLS-listed residential real estate transactions in the state.  The metrics do not include “For Sale by Owner” transactions or all new construction.