After six consecutive months of steady movement upward, sales of single-family homes declined 4 percent to 8,700 and condominium/townhouse sales were down 2 percent to 2,761 compared to June.  Even so, those figures compare very favorably to July 2014 (+5 percent for single-family and +13 percent for condominiums/townhouses).  A drop in home sales at this time of year is common, according to REALTOR® experts, often due to summer vacations and families preparing for the start of a new school year. 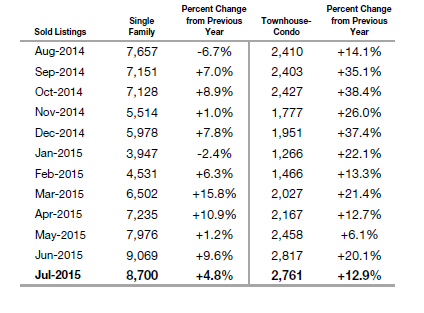 The statewide median price of a single-family home decreased to $310,000 (from $315,000 in June) and went down to $215,100 (from $219,700 in June) for condominiums/townhouses.  Similar declines appeared in most areas of the state, suggesting that the aggressive price increases characteristic of the last two years may be slowing down or leveling off.  Low inventory continues to be a serious issue in all areas of the state though with fewer buyers in the market last month the real estate environment is not quite as competitive and homes are not selling as quickly. For the full reports on each region, please visit:  www.coloradorealtors.com/real-estate-statistics/

In the Metro Denver Region (Denver, Jefferson, Adams, Arapahoe, Broomfield and Douglas counties) sales of single family homes declined 5 percent to 4471 while condominium/townhouse sales rose less than 1 percent to 1778.  The median price for a single-family home decreased to $346,653 (down from $357,000 in June) and dropped to $215,000 (compared to $218,000 in June) for condominiums/townhouses.  While this region has enjoyed steadily increasing inventory since the beginning of the year, figures remain historically low.  At the end of July there were 9.450 properties available in the Denver Metro region representing less than a 2-month supply.  Days on the market continued to fall, down to 21 for single-family homes and 15 for condominiums/townhouses.

“Buyer traffic was slightly lower than earlier in the year which is typical for the summer vacation season,” reports Metro Denver Region CAR spokesperson Dave Kupernick. “There was however, a spike right at the end of the month which may indicate an influx of buyers looking to close and get settled into their new home early in the school year. Cash offers are still common and not limited to the low end of the market. Buyers continue to use creativity in their offers and are still taking on the risk of buying homes “as-is” and offering to cover the difference between appraisal value and purchase price if necessary.”

In the Mountain Region (Garfield, Grand, Gunnison, Jackson, Pitkin, Routt, San Miguel and Summit Counties) sales of single-family homes decreased 8 percent to 321 and 2 percent to 323 for condominiums/townhouses compared to June.  The median price for a single-family home increased to $510,000, up 21 percent from a year ago while the median price for a condominium/townhouse decreased to $345,000, down 4 percent from July 2014.  New listings were down 27 percent for single-family and 9 percent for condominiums/townhouses compared to June, contributing to the area’s continuing problem with low inventory.  At the end of July there were 5.497 properties available for purchase in this region, a decrease of 20 percent from July of 2014 and a drop from June of this year in both categories.

According to Kelly Moye, CAR spokesperson for this region, “Even though the northeast district experienced a slowdown in July and August, I am still seeing competing offers on affordable and well-priced listings but the frenzy of the spring has quieted down.  Buyers are talking about rising interest rates and are concerned.  Average days on the market seems to be around 60, instead of 30-ish, unless a home is priced under $300,000.”

The Northwest Region of Colorado (Delta, Hinsdale, Mesa, Moffat, Montrose, Pitkin and Rio Blanco counties) experienced the same pattern of a decline in sales in July (compared to June) as the rest of the state.  Single-family home sales dropped 3 percent to 434 and condominium/townhouse sales were down 19 percent to 43.  Compared to July of 2014, however, the two categories of homes were up 17 percent and 48 percent respectively.  The median price for a single-family home in this area increased to $218,450 and for a condominium/townhouse the median price rose to $155,000.  At the end of June there were 2,247 single-family homes and 167 condominiums/townhouses on the market representing a 7-month supply.  The Northeast Region is the only area of the state that has what experts consider a balanced market (5-7 month supply) that favors neither buyers nor sellers.

“The Colorado Springs market remains active with 19% fewer active listings than in July 2014”, according to Jay Gupta, CAR spokesperson for the Southeast Region.  “During the last seven months of 2015, sales of Single Family and Patio Homes were up 18.9% and Sales Volume was up 28.4% over the same period in 2014.  In July 2015, 95% of the sold properties were priced under $500,000. Accordingly, there is a continuing shortage of inventory of properties priced under $500,000.”

The Southwest Region of Colorado (Alamosa, Archuleta, Conejos, Costilla, Dolores, Hinsdale, La Plata, Mineral, Montezuma, Saguache and San Juan counties) enjoyed five months of steadily increasing single-family home sales before stepping back in July.  The 165 single-family homes sold in July represent a 26 percent decrease from June.  Condominium/townhouse sales continued to improve, up 10 percent to 45 in June compared to the same month last year.  The median sales price of a single-family home rose to $297,000, up 10 percent compared to July 2014.  The median price for condominiums/townhouses dropped slightly to $222,000 but is still up 9 percent over July 2014.  At the end of July there were 1,830 single-family homes and 268 condominiums/townhouses on the market representing about an 11-month supply.  This situation was not helped when new listings of single-family homes dropped 26 percent from June to July and condominium/townhouse listings went down 14 percent.

From Don Ricedorff, CAR Southeast Region spokesperson we learn “the La Plata County real estate market continues to exceed levels from last year.  The Durango portion of the market is the strongest, and properties in-town that are walkable and rideable seem to have the most interest.  Properties on small acreage (e.g., 3-10 acres) are still lagging in sales compared to the top of the market.  Through the first 7 months, sales of properties over $1 Million are behind last year.”